Reviving a Traditional Society: The Russian Social Experiment and Heraldry

After the collapse of the Soviet Union and the communistic system in Russia in the 1990s, the country found itself in a state of stupor and decline. Life expectancy declined, the GPD of this vast country was relatively very small; Russia was looking for a new societal model after 70 years of Leninism and Stalinism.

Russia’s new strong man, Vladimir Putin, took the position and policy that Russia needed to recover a sense of national unity, identity and purpose by recovering its traditional history, models and spiritual foundation. This is well documented in the book Holy Rus by American pastor John P. Burgess.

As a result, Russian textbooks and movies, notably those directed to the youth, have sought to build on the visual power and appeal of traditional arts to inspire a new generation to support a more traditional, or even traditionalistic, model of Russian society. Heraldry is often featured, as can be seen below.

← Previous Story: The College of Arms of Canada: A Review 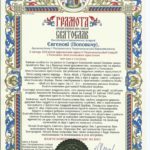 → Next Story: The Traditional Art of the Russian Orthodox Gramota